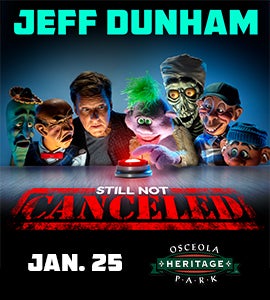 Jeff Dunham returns to the Silver Spurs Arena at Osceola Heritage Park on January 25, 2023.  His last show at the Arena was a sell-out and his return has long been anticipated.

Jeff has appeared on the Late Show with David Letterman, Comedy Central Presents, and The Tonight Show. He has six specials that run on Comedy Central: Arguing with Myself, Spark of Insanity, Jeff Dunham's Very Special Christmas Special, Controlled Chaos, Minding the Monsters, and All Over the Map.

Dunham is a highly skilled ventriloquist whose style has been described as "a dressed-down, more digestible version of Don Rickles with multiple personality disorder". Time Magazine described his characters as "politically incorrect, gratuitously insulting and ill-tempered."

According to the concert industry publication Pollstar, he is the top-grossing standup act in North America.  He has sold millions of DVDs and hundreds of millions of hits on YouTube.  Tickets go on sale to the public on October 10.

Osceola Heritage Park is located off of Hwy 192, just two miles west of the Florida Turnpike. The Jeff Dunham "Still Not Canceled" event will be located at the Silver Spurs Arena.

BAG POLICY: While guests are encouraged to leave bags behind, the following bag types are permitted:

For more information about our policies at Osceola Heritage Park, just click HERE.