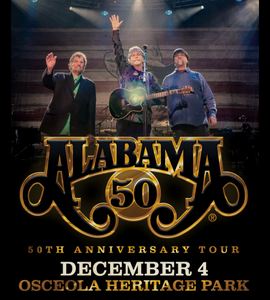 TICKETS ON SALE THIS FRIDAY FOR ALABAMA’S

50 years ago Jeff Cook, Teddy Gentry and Randy Owen left the cotton farms of Fort Payne, Alabama to spend the summer playing music in a Myrtle Beach bar called The Bowery. From humble beginnings picking cotton to international stars, ALABAMA went on to sell 80 million albums of quality songs that have become the soundtrack for American life. ALABAMA has charted 43 #1 singles, including 21 #1 singles in a row, and have won dozens of CMA, GRAMMY®, and ACM Awards. They are members of the Country Music Hall of Fame, the Musicians Hall of Fame and have their own star on the Hollywood Walk of Fame. For more please visit www.thealabamaband.com

EXILE formed in 1963 and has managed to top both the pop and country charts during their more than 50 year-long career. Their most successful hit, “Kiss You All Over,” spent four weeks at the top of the Billboard pop chart in 1978. In the early 1980's, Exile started to focus on country music. During their run on the country charts, Exile has successfully had ten No. 1 singles and many more top 20's. The five original members of the band reformed in 2008 and continue to tour today.

Outback Presents is the leading independent, full-service promoter of live entertainment. From their home base in Nashville, TN, Outback Presents specializes in producing music and comedy shows, tours and festivals across North America and connecting their diverse roster of artists with their fans. For more information on Outback Presents, visit outbackpresents.com