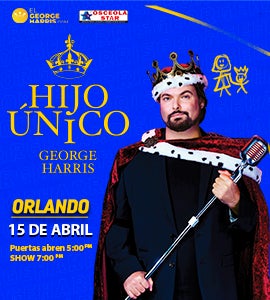 Tickets are now ON SALE for

Kissimmee, FL – December 13, 2022 - Stand-up comedian George Harris, a Venezuelan icon is coming to the Silver Spurs Arena at Osceola Heritage Park on April 15, 2023. George premieres his new show, Hijo Unico “Only Child”. In this, he shares his observations of growing up in a Latin American country and that, after living more than 10 years in Miami, he compares how he grew up with the methods that parents now use to educate their children.

“Hijo Unico “Only Child” humorously delves into topics such as how much is given to today’s kids, from almost infinite understanding to not denying them anything. George takes us on a hilarious journey into the past and back into the present. Tickets are now on-sale at Ticketmaster.com and the Silver Spurs Arena Box Office.