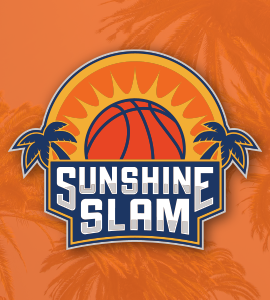 KISSIMMEE, FL – The schedule is finalized for the inaugural Sunshine Slam (@TheSunshineSlam), a men’s collegiate basketball tournament that will take place Nov. 8-10 at the Silver Spurs Arena in Kissimmee.

Delaware, Oakland, Southern Illinois, and UTSA comprise the tournament field, which consists of a round-robin format with each team playing the other over the course of the three days. All six games will be streamed live on FloSports.

“We’re pleased to welcome the four Division I men’s basketball teams to the Sunshine Slam,” said Jason Siegel, CEO of the Greater Orlando Sports Commission. “The Silver Spurs Arena at Osceola Heritage Park is an exceptional venue and will provide an incredibly positive experience for the student-athletes and their families as they tip-off their 2019-2020 basketball season.”

"We are pleased to welcome the inaugural Sunshine Slam basketball tournament to the Silver Spurs Arena at Osceola Heritage Park," remarked Robb Larson, General Manager of Osceola Heritage Park/SMG. "We look forward to working with the Gazelle Group and Greater Orlando Sports to add an NCAA Division I college basketball tournament to our calendar of successful annual events and welcome these four great universities to our community. The history and quality of their basketball programs promises to make our inaugural tournament a memorable one.”

Tickets to the inaugural Sunshine Slam go on sale at noon today and may be purchased through TicketMaster.com.

For more information about the Sunshine Slam, visit www.sunshineslam.com

Delaware (Head Coach: Martin Ingelsby, Colonial Athletic Association) – Since Martin Ingelsby took over at Delaware three seasons ago, the Blue Hens have shown steady improvement…in posting 17 wins a year ago, Delaware recorded its most wins since the 2013-14 season…three starters return from that squad, paced by guard Ryan Allen, who led the Blue Hens with a 16.0 ppg average while shooting 41% from 3-point range…a second member of the back court, Kevin Anderson, led Delaware with 109 assists to go with a 10.7 ppg scoring average…the Blue Hens add eligible transfers Nate Darling (UAB) and Justyn Mutts (High Point) who are expected to make immediate contributions.

Oakland (Head Coach: Greg Kampe, Horizon League) – Only Syracuse’s Jim Boeheim (44 years) and Duke’s Mike Krzyzewski (40 years) have been at their schools longer than Greg Kampe has been at Oakland…entering his 36th year, he has led the Golden Grizzlies to 618 wins and seven NCAA Tournaments, including three at the Division I level…three starters return from a year ago, led by first-team All-Horizon League selection forward Xavier Hill-Mais, who led the Golden Grizzlies in scoring (18.3 ppg) and rebounding (7.2 rpg)…center Brad Brechting tallied 9.5 ppg while shooting a team-best 58% from the field…sophomore guard Tray Maddox, Jr. started 20 games last season and averaged 6.7 ppg.

Southern Illinois (Head Coach: Bryan Mullins, Missouri Valley Conference) – Bryan Mullins returns to his alma mater as head coach after serving on the staff at Loyola Chicago, where he helped guide the Ramblers on a remarkable run to the 2018 Final Four…with the Salukies, he inherits a team with only four players returning from a 17-win squad a year ago…leading that group are a pair of guards in Aaron Cook and Eric McGill…Cook led the team with 118 assists while scoring at a 10.4 ppg clip…McGill tallied 9.7 ppg and pulled down 5.7 rpg…forward Brendan Gooch played in 16 games last season.

UTSA (Head Coach: Steve Henson, Conference USA) – Steve Henson enters his fourth season at UTSA and welcomes back three starters, including the highest scoring backcourt tandem in the country…guards Jhivvan Jackson and Keaton Wallace combined to score 43.1 ppg, tops in the nation a year ago…Jackson led C-USA in scoring at 22.9 ppg to go with 4.1 rpg in earning first-team all-league honors…Wallace averaged 20.2 ppg and 5.0 rpg to garner second-team honors…senior forward Byron Frohnen, who has made all 100 starts in his career, returns after averaging 6.4 ppg and 6.8 rpg.

About the Gazelle Group
The Sunshine Slam is produced by the Gazelle Group of Princeton, N.J. The Gazelle Group is a sports marketing firm, specializing in event production and management, client representation, and sponsorship consulting. Gazelle produces numerous nationally-recognized events, such as the Empire Classic benefiting Wounded Warrior Project, the Legends Classic presented by Old Trapper, the Gotham Classic, and the College Basketball Invitational. For more information on the Gazelle Group, please visit gazellegroup.com.

About the Northeast Conference
The Northeast Conference (NEC) is the sponsoring conference of the Sunshine Slam. Entering its 39th season, the NEC is a NCAA Division I collegiate athletic association consisting of 11 institutions of higher learning located throughout seven states. For more information on the NEC, visit the official website at www.northeastconference.org or follow on Twitter @NECsports.

GO Sports is a private, non-profit organization established to attract and manage sports-related events, conferences and activities that drive positive economic development in the City of Orlando, Lake County, Orange County, Osceola County, and Seminole County. Founded in 1993, the organization has hosted or co-hosted more than 1,300 events in the Greater Orlando area with a total economic impact exceeding $1.4 billion in spending within the community. For more information, please visit GreaterOrlandoSports.com.