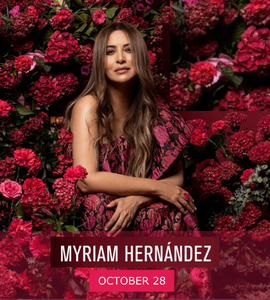 Kissimmee, FL - Tickets are on sale now for Myriam Hernández in concert on October 28 at Osceola Heritage Park’s Silver Spurs Arena.  Myriam began her career in the late 1980s and her first track was "Ay Amor." At 18 she was named Artista Revelación (Best New Artist) by the Chilean press before having even recorded a single album. In Chile, in October 1988, Hernández released her first album with EMI entitled "Myriam Hernández". In Chile, the record got her the Disco de Oro, and would later go quadruple platinum, including in the United States, Colombia, Peru, Ecuador, Bolivia, Puerto Rico, Costa Rica, and Panama. Thus began her international career. Two tracks on this album, "Ay Amor" (Oh My Love) and "El Hombre que Yo Amo" (The Man I Love), spent months at the top of music charts in Latin America and the U.S. In February 1989.

She has collaborated with Paul Anka, Céline Dion, Ricky Martin, Julio Iglesias, and Juan Gabriel, among others. Now, she is bringing her beautiful voice and romantic ballads to Osceola Heritage Park for one night only.  Tickets are now on sale at ticketmaster.com.