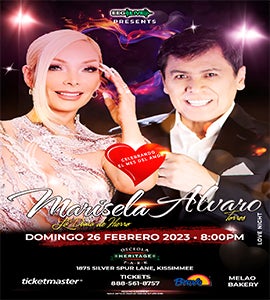 Kissimmee, FL – December 15, 2022 – Marisela Hernandez and Álvaro Torres will be performing “Enamorados” Live in Concert at the Silver Spurs Arena at Osceola Heritage Park on February 26, 2023.

Marisela Hernandez, known as Marisela, is an American Mexican singer. In 1984, she recorded her first album at the age of 18 and continued to release albums into the 1990s. Her cover version of Barbara George's single "I Know", titled "Ya No", peaked at number one in the Billboard Latin Songs chart in 1990.

Álvaro Torres was born on April 9, 1954, in Usulután, El Salvador. Torres moved to Guatemala and started a solo career recording his first album, "Algo especial" (Something Special) in 1976. In 1977 he released the album "Acariciame" (Caress Me) and one year later, he was selected by TCS to represent his country in the seventh edition of the OTI Festival that was held in Santiago, Chile. Some of his more famous songs are "Hazme olvidarla", "La Unica" (The Only One), "Lo Que Se Dice Olvidar", "Si Estuvieras Conmigo" (If you were here with me), and "Nada se compara contigo" (Nothing Compares to You).

Tickets are now on-sale at Ticketmaster.com and the Silver Spurs Arena Box Office.