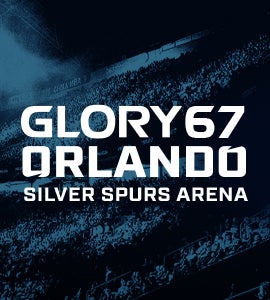 KISSIMMEE, FL - GLORY, home to the most elite stand-up fighters on the planet, heads to Florida on Friday, July 5 for GLORY 67 ORLANDO at Kissimmee’s Silver Spurs Arena.

The main event features undisputed world featherweight champion Petchpanomrung (162-36-2, 27 KO’s), of Bangkok, Thailand, in what will be his fourth fight with a GLORY championship belt on the line.

Opposite him in Orlando will be the hardest-hitting fighter in the division. From the central Asian steppes of Uzbekistan, once part of Genghis Khan’s empire, comes Anvar ‘The Uzbek’ Boynazarov (95-26-2, 53 KO's), owner of more knockout wins than any other fighter in the 145 lb weight class.

Petchpanomrung, born in an impoverished village in rural northern Thailand, literally holds his family’s fortunes in his hands. Having entered the Muay Thai fighting rings of Thailand at just nine years old, the prize money from his fights has lifted his parents and siblings out of poverty.

‘The Uzbek’ is aiming to put a hard stop in the path of Petchpanomrung’s journey to greatness when they meet in the GLORY 67 main event and in so doing hopes to place the world title around his own waist.

In the co-headline spot, two former GLORY world champions will battle to determine which one of them steps closer to another shot at the world title. It’s a battle of the America’s as California’s Tiffany van Soest (19-4-1, 6 KO’s) faces Brazil’s Jady Menezes (13-3, 5 KO’s).

Van Soest, from Riverside, CA, was the first super-bantamweight champion in GLORY history. She won an eight-woman Grand Prix tournament to lay claim to the belt in December 2016. It slipped from her grasp a year later and then went on to adorn Menezes, of Curitiba, Brazil.

The belt is now in France, where it is in the possession of current champion Anissa Meksen. In order to try and reclaim it, Van Soest and Menezes must first contend with one another.

Florida’s own Asa Ten Pow (9-1, 5 KO’s) also features on the GLORY 67 ORLANDO card. The West Palm Beach resident has earned a reputation as one of America’s leading world title prospects thanks to a dynamic and effective fighting style.

Having gone unbeaten since being called up to GLORY last year, Ten Pow and rides a three-fight win streak into GLORY 67 ORLANDO, where he will face ‘The Moroccan Maniac’ Houssam El Kasri (2-2, 2 KO’s), who has scored two knockout wins of his own since joining GLORY last summer.

Tickets are on sale now at GloryKickboxing.com

Founded in 2012, GLORY is the world’s premier stand-up combat league. Owned and operated by GLORY Sports International (GSI), the league holds 14 global events per year, with media distribution to over 200 territories throughout the world.

GLORY events are governed by GLORY Rules, which permit a mix of several combat disciplines including Karate, Muay Thai, Tae Kwon Do and Boxing.